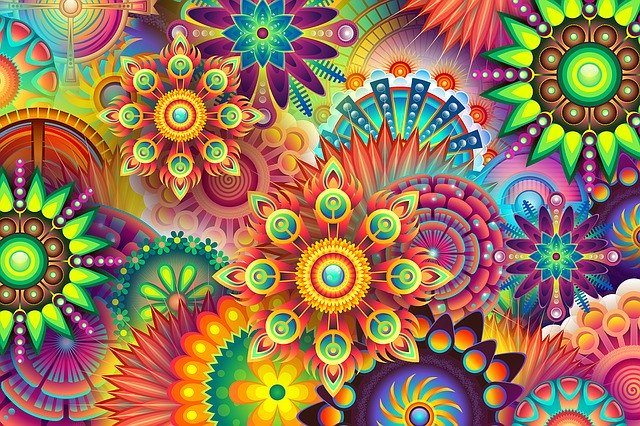 When you think of LSD, do you picture the 1960s? Although I was born long after the summer of love, the idea of LSD still brings to mind music festivals, tie dye, and a few of my favorite Beatles songs. LSD has waxed and waned in its cultural popularity over the decades but is still used as a recreational drug today. Now though, LSD and other drugs in the psychedelic family are also being investigated as potential breakthrough treatments for mood disorders, pain conditions, and specific types of anxiety. How might a psychedelic drug help to cure these ailments?

LSD stands for lysergic acid diethylamide and was first discovered in 1938. It is classified as a hallucinogen or psychedelic and is most commonly taken by placing a small amount of the drug under the tongue. LSD is often used for recreational or spiritual purposes, as its effects can include visual perceptual distortions, altered sensory experiences, and feelings of intense euphoria. These effects are long lasting, sometimes continuing up to 12 hours after taking the drug.

LSD isn’t classically addictive and no one has overdosed on LSD to date, but it’s still classified as a Schedule 1 controlled substance (a category that designates a drug with potential for abuse and no known medical uses). Taking LSD does entail some risks1. Some people experience unpleasant and occasionally severe negative effects after taking LSD, such as intense paranoia and anxiety, commonly referred to as a “bad trip”2. These effects can linger long after the drug has been cleared from the body, and people sometimes experience hallucinatory flashbacks or nightmares, also called hallucinogen persisting perception disorder2. There is also some evidence that LSD might induce psychosis in people who are at high risk for developing a psychotic disorder1. Researchers who investigate LSD as a potential treatment are careful to screen for and attempt to minimize these possible risks1.

In the brain, LSD’s mechanisms of action help to explain its diverse and seemingly mystical psychological and perceptual effects. LSD primarily acts on a specific type of serotonin receptor. Serotonin is a neurotransmitter that is involved in regulating many things including mood, emotion, and cognition. The most widely used drugs for treating anxiety and depression, selective serotonin reuptake inhibitors (SSRIs), act on the serotonin system to produce their antidepressant effects, which might help to explain LSD’s effects on increasing feelings of well-being as well as its potential use for psychiatric treatment.

The intense perceptual effects of LSD can also be explained by its action at serotonin receptors. It is an agonist of the serotonin 2A receptor, abbreviated 5-HT2AR2,3. Activating 5-HT2A receptors in part of the medial frontal cortex can alter signal transmission through the thalamus, a relay station for many types of sensory inputs. This type of change could lead to perceptual effects commonly experienced when taking LSD such as “seeing sounds”4.

Another downstream effect of serotonin binding is an increase in glutamate signaling in the prefrontal cortex3,5. Following LSD administration in rats, researchers observed an increase in the neurotransmitter glutamate in the synapses in the prefrontal cortex6. Glutamate is typically an excitatory neurotransmitter with many roles in the brain, but it is not known yet exactly how this change in glutamate signaling relates to effects of LSD.

LSD is unique from other types of psychedelics because it also acts on certain types of dopamine receptors5. LSD affects dopamine signaling in part of the brain called the ventral tegmental area7. This region is also where antipsychotic drugs work, which may partially explain why LSD can produce psychosis-like effects in certain cases.

Studies using brain imaging have also pointed to potential explanations for LSD’s diverse set of effects. MRI scans can be used to measure functional connectivity in the brain, or the degree to which certain brain regions are communicating with each other. LSD increases functional connectivity between regions like the thalamus and cortex, leading to overall greater synchrony between regions8. This increased communication between regions that are normally more distinct could account for some of the sensory crossover effects of LSD.

In recent years, researchers have been able to get regulatory approval to investigate potential therapeutic uses of psychedelics, including LSD. One small study looked at the ability of LSD to help with anxiety related to terminal illness9. Patients with life-threatening diseases and resulting anxiety received either 200 μg of LSD (about the same amount taken recreationally to include an LSD trip) or a placebo in combination with psychotherapy. LSD-assisted psychotherapy sessions lasted 8 hours and included conversations with a therapist and listening to music. Results indicated that compared to placebo, LSD was effective at lowering anxiety levels and that decreased anxiety was still observable 12 months after the LSD intervention. This study suggests that a single LSD treatment session could produce long-lasting reduction in anxiety.

LSD may also be beneficial for reducing alcoholism. A meta-analysis, or comparison of results from many studies, conducted in 2016 found evidence that a single dose of LSD led to a short-term reduction in alcohol misuse compared to placebo10. These single doses of LSD were high enough to produce a full trip. Placebos usually consisted of a small dose of LSD to keep participants from being able to tell which group they were in, but not enough of a dose to produce a therapeutic effect. Currently pharmaceutical interventions for alcoholism are not widely used, so LSD could serve as a new strategy to target this hard-to-treat condition.

Ongoing research into psychedelics and hallucinogens including LSD will continue to investigate new uses for these drugs. More recent studies have found that an oral dose of psilocybin, another drug in the hallucinogen family, is also effective at reducing anxiety and depression related to terminal illnesses11. In time, larger clinical trials will be needed to prove that these drugs are both effective and safe, but in time, they may open the door to a new strategy for psychiatric treatment.

3 thoughts on “LSD on the brain”