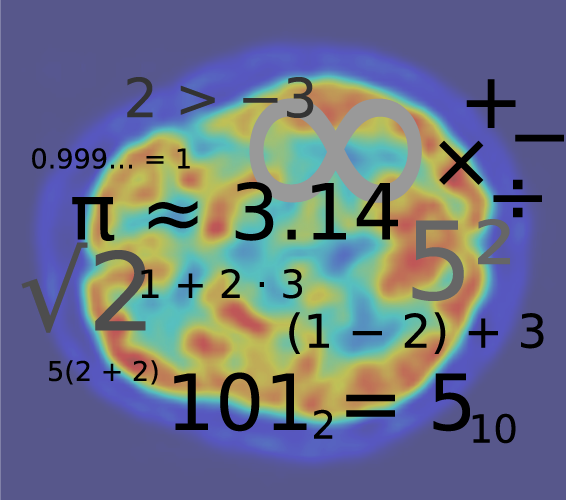 At one point or another, we have all been in a math class. Whether we struggled through it and decided it wasn’t for us, or ended up becoming a mathematician, we started off the same way. Learning how to count, then add and subtract, maybe even do some algebra. While it might not seem like it, mathematical calculation is useful in our daily lives (ask anyone who’s ever tried to split a dinner bill with friends!)  and some form of numerical thinking was likely very important for survival as we evolved. Numerical calculations, however, involve assigning meaning to symbols and mentally manipulating them based on previously learned rules, a process similar to reading and writing. You may wonder then, as with language, are there are regions of the brain that are built especially for math? And if there are, do they differ among us?

Are our brains hard-wired for math?

A hotly debated question in psychology and neuroscience is whether our brains are born with the structure and ability—or “hard-wired”—for language. Most babies are exposed to language the minute they are born, encouraged to make sounds as infants, and taught letters as soon as they are able to talk. So does language just take a while to learn, or are there areas of the brain dedicated to language that simply need to develop before the capacity for language is reached? Several studies have indeed supported the hypothesis that our brains are hard-wired for language. For example, one study found that we are better able to discriminate sounds that are more common in universal language (for example, blif) than sounds that are less common (like lbif)1. Further, regions of the brain that are important in the processing of language are more active when we hear these universally common sounds, than universally uncommon but similar sounds1 .

This begs the question, then, of whether our brains are also hard-wired to understand numbers and math. An important study2 published in 1992 suggests this might be the case. Researchers placed a single doll in front of 5-month-old infants, and then blocked their view of the doll with a small screen. They then added another doll behind the screen in full view of the infant. Finally, they removed the screen to reveal the dolls. In some cases, there were two dolls behind the screen. In others, however, they added another doll behind the screen, or took one doll away such that the baby could not see. In these cases, an unexpected number of dolls (one or three) was behind the screen when it was removed. To measure whether the babies could tell the numerical inconsistencies, they recorded the length of time the babies were looking at the objects. Previous work established “looking time” as a measure of a baby’s interest or confusion. The babies in the study looked at the dolls for significantly longer in trials where there was an unexpected number behind the screen compared to trials in which there were two dolls behind the screen. This work, since repeated by several other groups, showed that perhaps babies are able to abstractly understand numbers and even perform simple arithmetic calculations at ages as young as five months. If our brains are able to understand mathematical concepts before we are taught them, there should be areas in our brains, then, devoted to numerical thinking and math, just as there are “language centers” in the brain.

Most of what we know about regions of the brain that are important in numerical calculation comes from human brain imaging studies. Scientists have found that a network of interconnected brain regions in the frontal and parietal lobes including the intraparietal sulcus (a groove or valley in the cortex, see Figure 1) of the brain are more active during mathematical calculations than other language tasks3. Interestingly, one study found that activity in these areas increases with increasing difficulty of the problem, and that the same network is active in congenitally blind subjects3. Both these lines of evidence again suggest a somewhat innate ability to understand numbers and perform calculations, even in the absence of sight and the ability to visualize numbers . In another study4, a different region was found to be preferentially activated by the sight of numerals. Researchers were actually able to record directly from the brains of epilepsy patients and found a tiny region of the inferior temporal gyrus  (see Figure 1) that responded to the sight of numbers such as “8” and “13” but not the words “eight” and “thirteen.”

Though these studies are correlational, they provide evidence suggesting that our brains are built to understand numbers abstractly and perform calculations, and certain areas of the brain are more active while performing these calculations. Why then, do some people consider themselves “math people” and others are adamantly “not math people”? Can differences in math ability be linked with function in these areas shown to be involved in math?

Are there really “math people?”

Can neuroscience give us insight into the basis behind individual differences in math ability? Is there really a sharp divide in the population between the brains of people who say that math comes easily to them versus those of people that say they never did and never will easily grasp math concepts? The short answer is: no. However, brain imaging studies have revealed some differences in brains of more versus less math-competent people. Interestingly, though, they are not in the regions discussed above that comprise the “math specific” network5. The differences are greater in regions that are important in memory in general, rather than arithmetic. For example, one study found that the size of children’s hippocampus, a structure critical in the formation of new memories, and the strength of its connectivity with other brain regions predicted the improvements in children’s math scores after an 8-week tutoring session6. Areas important in arithmetic processing, on the other hand, did not predict improvement.

It turns out, however, that one of the strongest predictors of success in math is gender, with boys, on average, outperforming girls. Are male brains better built for math than female brains? Again, the short answer is: no. In fact, the size of the gender gap in math achievement across countries correlates with the cultural achievement gap between women and men in that society7. For example in Sweden, where gender equality is high, there is virtually no difference between the math scores of boys and girls7. This suggests that while there may be differences in the brain areas important in solving mathematical problems, societal influences tend to play as big if not a bigger role in individual differences in success in math. Importantly, this also means that continuing to advance towards gender equality may also shrink the gender gap in math success, which will only become more critical as more and more jobs in the economy rely on strong math skills .