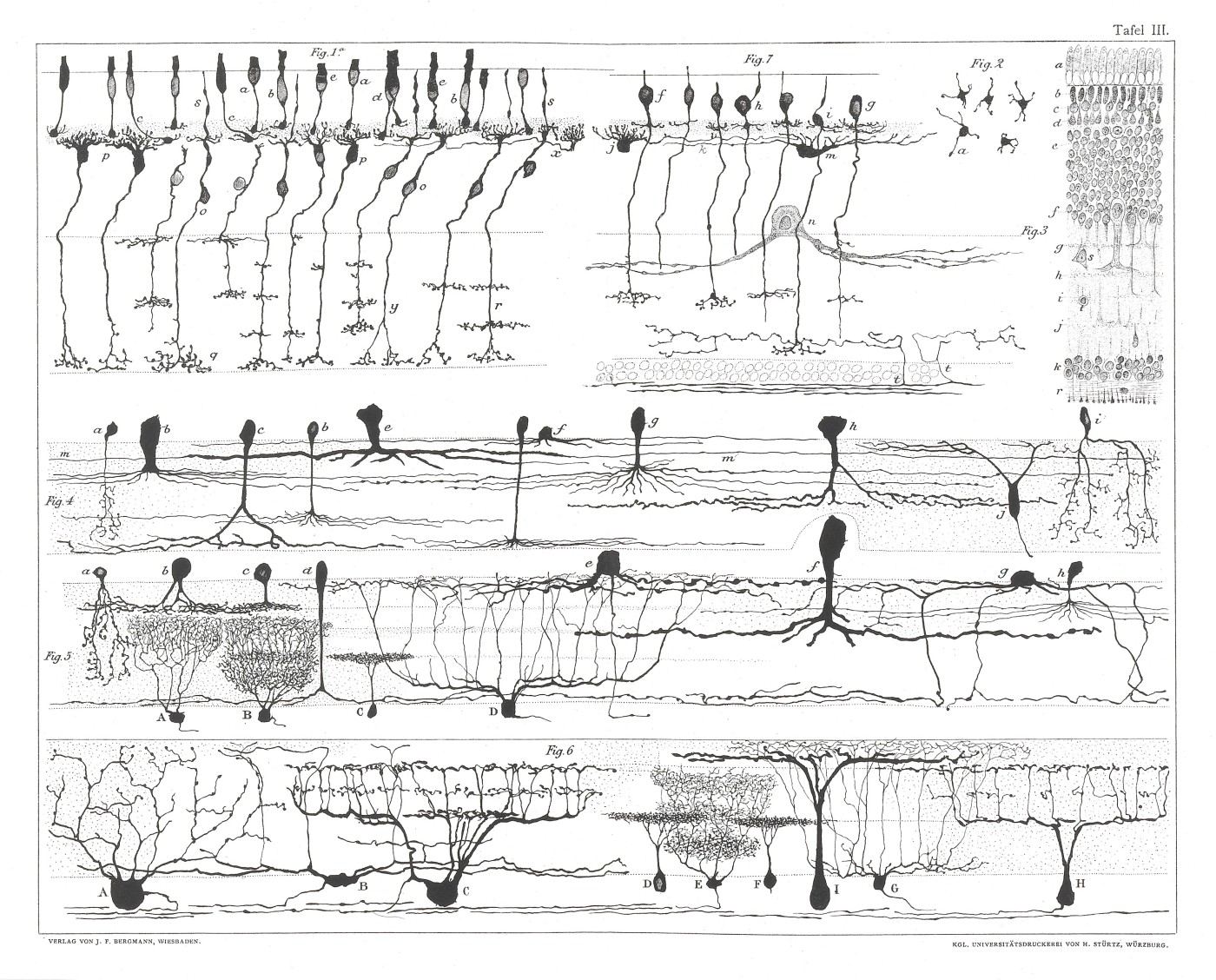 What image forms in your mind when picturing a neuron? For many people, it might look a little something like the illustration on the right (Figure 1). This diagram, of the type often shown in introductory biology textbooks, is meant to depict a “typical” neuron. It is true that almost all neurons have dendrites, which receives signals from other neurons, and an axon, down which it sends signals to other neurons. But this cartoon neuron looks like a pitiful sapling next to the lush plume of the Purkinje cell (Figure 2), a type of neuron found in the cerebellum! In reality, neurons come in a dizzying array of shapes and sizes. And the impressive peacock tails on Purkinje cells are not just for show; the shape of a neuron can be a critical requirement for the neuron to carry out its intended function.

The study of the shapes of neurons, formally called neuromorphology, is greatly indebted to the work of Spanish neuroscientist Santiago Ramón y Cajal (1852-1934).1 In the late 19th and early 20th century, Ramón y Cajal used a new technique called the Golgi method which dyes cells in the brain black. Ramón y Cajal was then able to look at these individual black neurons under a microscope and make stunningly detailed drawings of their different shapes (Figure 3). Even though he was working with simple tools at a time when our understanding of the brain was primitive, Ramón y Cajal remarkably described most of the different classes of neurons that we still recognize today.

Neurons of all shapes and sizes

As illustrated by the morphological drawings of Ramón y Cajal, we have a dazzling array of neuron species in the intricate ecosystems that make up our brains. To try to keep straight these many species of neurons, neuroscientists have dubbed them with often charming names that reflect their distinctive shapes. Basket cells are so named because they appear to form a little basket that cradles the cell body of a neighboring neuron (Figure 4, red).2 Basket cells use their so-called “basket” to directly inhibit electrical activity at the cell bodies of their neighboring neurons (rather than at other neuronal compartments such as the dendrites or axon). Chandelier cells have branches of their dendrites that are arranged into short vertical arrays resembling the candlesticks that hang from an old-style chandelier (Figure 4, blue).3 In contrast to basket cells, chandelier cells use these hanging candlesticks to inhibit their neighboring cells at the axon. Neurogliaform cells (Figure 4, green) are named for their resemblance to glia, a word for the non-neuronal immune cells that are also found in the brain (though they were originally described as “spiderweb cells” by Ramón y Cajal).4 In these cells, which are found on the very surface of our brains, their axon forms a large, dense nest around their small cell bodies. Unlike most neurons, which contact their partners in discrete locations, these cells have the ability to dump clouds of GABA, a chemical that typically inhibits any neuron to which it binds. This allows neurogliaform cells to indiscriminately inhibit any neurons that happen to fall within their webs!

The diversity of neurons isn’t just reflected in their shapes, but in their sizes as well. Many neurons that inhibit other cells are just large enough to reach their neighbors in the brain, with cells bodies only a few micrometers in diameter. In contrast, some of the neurons that reside in the part of your brain that controls voluntary motion are much larger.5 These cells have huge cells bodies up to 100 micrometers in diameter, with axons that stretch from your brain all the way down your spinal cord. If you venture outside the human body and into the rest of the animal kingdom, neurons can get really big. Squid even have neurons that are visible to the naked eye, with giant axons up to 1 millimeter wide!6

The shape and size of neurons are important factors that contribute to the ways in which they process information and communicate with other neurons. In the case of the Purkinje cells shown in Figure 2, their massive tree of dendrites is crucial for orchestrating the movements necessary for our interactions with the world.7 Even a simple movement, such as reaching out a finger, requires incredibly complex computations. When reaching out a finger, the brain has to integrate a huge amount of information while executing the action: Where is the finger currently in space? How fast is the finger moving? What direction is the finger moving? How far do I predict the finger will go if I apply a certain amount of force? What is the rest of my hand doing? It is the Purkinje cell’s job to collect all this information in real time, then quickly decide what to do to keep the finger moving in the intended direction. To do this, it takes advantage of its huge tree of dendrites, collecting different pieces of information at each of its branch’s tips (Figure 5). It then shuttles that information down its dendritic branches to the cell body. At the cell body, the Purkinje cell can integrate all the different signals from the branches of dendrites into a final decision about execution of the next movement.

The beautiful illustrations of Ramón y Cajal and the images captured with the much fancier microscopes of the modern era are reminders that individual neurons are not just repeating copies of transistors in a circuit board. Instead, each neuron is a complex machine in itself whose form elegantly reflects its function. And an understanding of the purposeful shapes of neurons will be crucial in our quest to understand how the activity of individual cells can explain the daily workings of the unimaginably complex machine that is our brain.