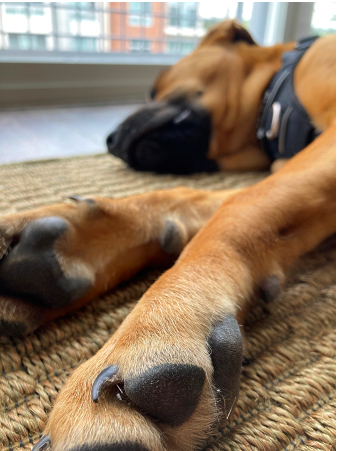 We all know someone who refers to themselves as a “dog mom” or “dog dad.” (Full disclosure – I am one of those people). But how similar is parenting a dog to parenting a child? Raising a child certainly has unique joys and challenges. At the same time, there are many undeniable parallels: arranging care when you can’t be with them, setting up and adapting to their schedule, making sure they have time with their friends, and more. Researchers have been looking for similarities and differences in the dog-owner and the child-parent relationships to understand the fundamental properties of caring for and bonding with someone.

One study looked specifically at how mothers’ reactions to seeing their own child or dog compares to seeing an unfamiliar child or dog. Moms reported equally as happy and excited to see their dog or child. They were more excited seeing their own child or dog compared to unfamiliar children or dogs. Researchers also used brain imaging to see what was happening in the brain during these experiences. They found that many brain areas showed the same pattern of activity when looking at your own dog as when looking at your own child, suggesting that dogs really do hold a child-like place in our minds.

For example, there was activation in response to seeing both dogs and children in the amygdala, which is involved in emotion. Multiple reward areas, including the medial orbitofrontal cortex and the putamen as well as regions associated with memory – the hippocampus and the thalamus—responded similarly to the pictures of dogs and children. Finally, the fusiform gyrus was activated for both. This region is critical for the processing of faces. Interestingly, the activity in this face area was higher when the women looked at their dog than when they looked at their child. The authors of the study hypothesize that face identification and facial expressions might be even more important for relationships with your dog than with your child.

One big difference in brain activity while looking at your child compared to your dog was in the ventral tegmental area (VTA). The VTA is a region located deep in the brain that sends signals up to the front of the brain. It is thought to be incredibly important for processing rewards. Why would this reward region not light up for your dog the same way it does for your child? One simple idea is that seeing your dog is just not as rewarding as seeing your child. This, however, is in contrast to what the moms reported – they were equally happy and excited to see both. Also, other reward regions (like the medial orbitofrontal cortex and the putamen) were activated for both…so what is special about the VTA? Digging a little deeper, the VTA is not only associated with reward generally, but also with specific reward associated with attachment and pair bonding. Pair-bonding involving the VTA has been seen with human-child pairs and also with romantic partner pairs. It seems that this type of bonding may be specific to human connections, despite the strong bonds we can feel with our dogs.

This study showed that the mom-child and the mom-dog connection are similar in many ways, but with some key differences that point to specific ways people may relate to their human children differently than their pets. It is a great start; but, there is still so much to learn about the bonds between people and their pets. As a “dog mom” myself, I still have a lot of questions related to our bond – does my strong response to my pup’s cry have anything to do with a mom’s response to her baby’s cry? Is my obsession with how good my pup smells related to parents’ attachment to their baby’s scent? Would I get the famed super-mom strength if my pup were endangered? Hopefully, these (and many, many more) of my puppy-mama questions will be explored by researchers in the coming years!