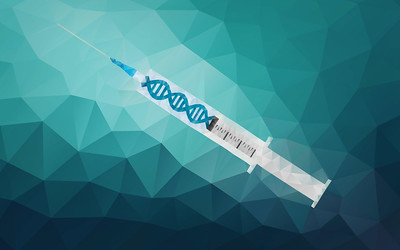 Different types of injury to the brain, such as head trauma, drug abuse, or neurodegenerative diseases, can lead to the death of the cells you need to perform important functions: your neurons. For this reason, scientists have looked at various approaches to replace functional neurons in the brain after injury. Now, a new study shows that using gene therapy, a technique that treats diseases by altering specific gene expression, is able to contribute to the regeneration of the brain after injury. A healthy brain can usually generate neurons by itself, but with injury, it needs a little push.

How do new neurons form in the healthy brain?

Unlike other organs of the body such as the skin, the adult brain has a limited capacity for developing new cells. This process, called neurogenesis, occurs when cells called neural stem cells give rise to new neurons that mature and integrate into the brain. Although the extent to which the adult brain can give rise to new neurons has been largely debated, scientists determined that neurogenesis does occur in two specific areas of the brains in neurologically healthy subjects1 (Figure 1). The first, the subventicular zone (SVZ), is an area that is just under the lateral ventricles of the brain. The second is the subgranular zone (SGZ) in the dentate gyrus of the hippocampus. Both of these areas are sources of neural stem cells that can proliferate, migrate to specific areas of the brain, and develop into mature neurons.

How to help the injured brain?

However, the brain’s limited capacity to generate new neurons is usually not enough in the face of an injury or disease, especially if it occurs away from the neurogenesis compartments. Researchers have tried different approaches of increasing the brain’s intrinsic capacity to produce new neurons. One approach has been using substances called neurotrophic factors that provide important signals which tell neurons to grow and survive. Studies using neurotrophic factors in animal models of Parkinson’s disease showed that injection of a specific factor called Glial Cell Line-Derived Neurotrophic Factor (GDNF) restored neuron number and promoted the functional motor recovery that was lost due to the disorder2. However, studies in humans have shown that infusing neurotrophic factors into the brain can have serious side effects such as neuropathic pain3.

Due to the complications and limitations of previous strategies, a group at Pennsylvania State University tried a new approach: transforming other cells already in the brain into neurons as a way to replenish them after injury. They did this by using gene therapy. Gene therapy is a technique that introduces genetic material into a cell to either inhibit production of harmful proteins or promote production of beneficial proteins (check out this cool video for more information on how gene therapy works!). In their first study, the scientists confirmed that they could indeed transform brain cells, in this case astrocytes, into neurons5. They expressed a specific protein called NeuroD1 that can control the expression of many other genes. By expressing NeuroD1 in the injured brains of mice, they saw that astrocytes that became activated with injury then switched into functional neurons in the brain. In their new study, they tested whether conversion would be enough to provide therapeutic relief in a mouse model of ischemic stroke6.

In this model, mice are injected with a piece of protein that leads to the constriction of blood vessels and causes a localized stroke injury. To try to repair injury, first the researchers engineered a system in which they would be able to express NeuroD1 specifically in astrocytes using viruses. The virus works as a carrier to introduce the gene of interest into the cells. Targeting the injured area, they injected a virus that would express NeuroD1 10 days after the stroke injury. With this system, they saw that astrocytes were gradually converted into immature neurons and finally mature neurons. The transformation also increased the survival of other neurons at the site of injury, suggesting it could help the repairment of the brain by protecting the existing neurons in the environment as well as by providing a new source.

Importantly, they showed that the newly generated neurons had appropriate electrical responses and fired action potentials, meaning they were forming connections with other neurons. The new neurons formed connections not only with local neurons that were next to them, but also with targets that were farther away. Using tracing experiments where researchers can see where neurons send their axons, they found that the newly converted neurons sent long projections to other brains areas such as the hippocampus and the thalamus. Neurons in the injured area were connecting with areas they would connect to normally, possibly through pathways that were already present.

The formation of new neurons and connections also seemed to have functional consequences. Mice that had a stroke injury had severe motor impairments. However, with NeuroD1 expression and consequent astrocyte-to-neuron conversion, their motor function significantly recovered. In collaboration with the University of Puerto Rico, School of Medicine, they performed the same experiments on rats to examine whether cognitive function was also rescued. They found that gene therapy rescued the memory deficits that rats showed in the conditioned fear response test after stroke.

Brain injury leads to the loss of thousands of neurons and severe functional consequences. This study provides exciting evidence for how gene therapy can be used to repair the brain after injury. By inducing a conversion of glial cells and providing neurons that were thought to be long-lost, gene therapy may be able to help people recover from brain injury.

One thought on “Transforming cells to repair the brain”