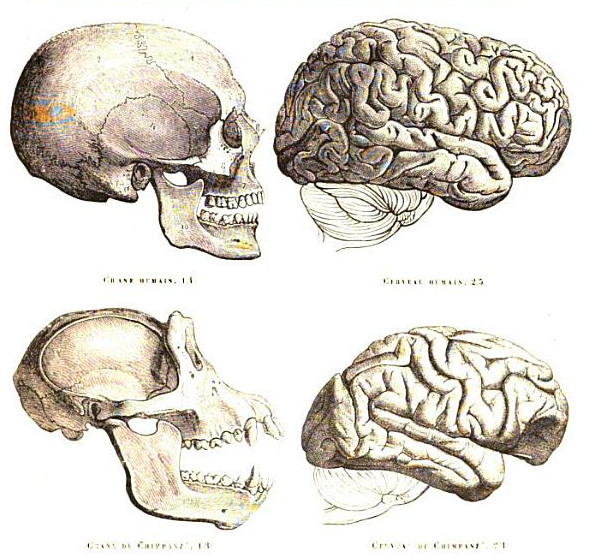 You probably have an idea of what a human brain looks like. But what about the brain of a dog? Or a dolphin? Or even a dinosaur? Are the brains of all these different animals set up the same way as ours?

It turns out that animal brains can look completely different from each other! But despite the differences in appearance, most brains are made of the same basic parts (Figure 1), just rearranged differently or found in different sizes. By comparing the brain regions of various animals, scientists can determine which features are unique to certain animals, and how that uniqueness might be reflected in specialized behaviors.

To start, let’s take a look at a rat brain compared to a human brain (Figure 2). Besides being much smaller than a human brain, rat brains have a smooth cortex compared to the gyrated cortex of humans. This folded arrangement of the human brain means that more neurons can fit within a given area. And since the cortex, and in a particular a region in the front of the brain called the prefrontal cortex, is responsible for complex thinking, this structural difference between humans and rats can help explain the behavioral observation that humans are smarter than these rodents. But rats have specialized areas too. Rats rely on smell much more than humans do, and this adaptation is reflected in their proportionally larger olfactory bulb, a structure involved with the sense of smell.

We can see more examples of behavioral specializations reflected in neuroanatomy in a wide number of animals (Figure 3).

Fish are thought of as fairly primitive animals, whose brains are more devoted to sensing and reacting than complex thinking. Their neuroanatomy lends support to this idea. Fish such as the narrownose chimaera have a prominent olfactory bulb, since many rely heavily on their sense of smell. The cortex is very small, and mainly functions to process odor information. The cerebellum and brainstem, which function in motor control to help the fish swim, are relatively large.

Birds such as the New Caledonian crow have a much larger cortex and cerebellum compared to fish, in order to regulate the complex motor skills and sensory input required for flying. However, you’ll notice that the cortex is still smooth instead of folded like a human brain. Birds have a poor sense of smell, reflected in the small olfactory bulbs that aren’t even visible in these images.

Dolphins are considered one of the smartest animals, and their brains look a lot like ours. They have a huge cerebral cortex, with even more folds than humans! Their cerebellum is also larger than ours, especially the parts of the cerebellum that have been associated with auditory function in other animals. It’s believed that this region is enlarged due to the dolphin’s echolocation abilities.1

Elephant brains also look similar to human brains. These animals are known to have good memory (an elephant never forgets!), complex social organization, and good hearing; all functions associated with the temporal lobe of the cortex, which is especially prominent in elephants (see purple arrow). Like dolphins, elephants also have a large cerebellum, but instead of using it for echolocation, it’s used for complex motor tasks (if you’ve ever seen the tricks that circus or working elephants can perform, you’ll know they’re actually very coordinated!).2

Not only can comparing the brain structure of different animals prove useful for understanding the relationship between brain and behavior, but it can also be used to try to understand brain evolution, or even approximate how the brains of extinct animals looked. For instance, the Witmer Lab at Ohio University made a 3D model of the inside of a fossilized Tyrannosaurus rex skull to get an idea of what the brain of this dinosaur might have looked like (Figure 4).3 We can see a large olfactory bulb, suggesting that the sense of smell was important to this animal. Scientists have even tried comparing the brains of alligators and birds (known relatives of dinosaurs) to try to get an idea of what dinosaur brains may have been capable of.

Figure 4: Model of a T-rex brain from Witmer Lab.

So far we’ve looked at brains from a range of vertebrate animals, and seen that although certain areas might be more prominent than others, all the brains are arranged basically the same way. Well all that goes right out the window when it comes to invertebrates (Figure 5). For instance, the simplest animals, jellyfish, don’t even have a brain! They just have a collection of neurons spread throughout their body—called a nerve net—that lacks any centralized control center. In worms and insects, neurons are grouped into connected clusters called ganglia that are located along the center of the animal. The ganglia at the animal’s head are often enlarged and can be thought of as a simple brain that helps coordinate the ganglia along different segments of the animal. But nothing is stranger than the octopus. These creatures have doughnut-shaped brains that encircle their esophagus, with large optic lobes for processing visual information, but the majority of their nervous system exists in their eight arms! What’s more, these arms are believed to act fairly independently, meaning that the brain might give a general order, but the arms decide how to execute it on their own.4 Octopus are believed to be intelligent animals, which just goes to show that there’s no one right way to organize a nervous system!

It’s clear that brains come in all shapes and sizes. But despite all the differences, each organism’s brain enables it to survive in its environment. By studying differences in brain size, structure, and even organization, scientists hope to gain a deeper understanding of the relationship between brain and behavior.

Figure 2: Brain images from the University of Wisconsin and Michigan State Comparative Mammalian Brain Collections (neurosciencelibrary.org). Preparation of all these images and specimens have been funded by the National Science Foundation, as well as by the National Institutes of Health.

One thought on “What’s in a Brain?”