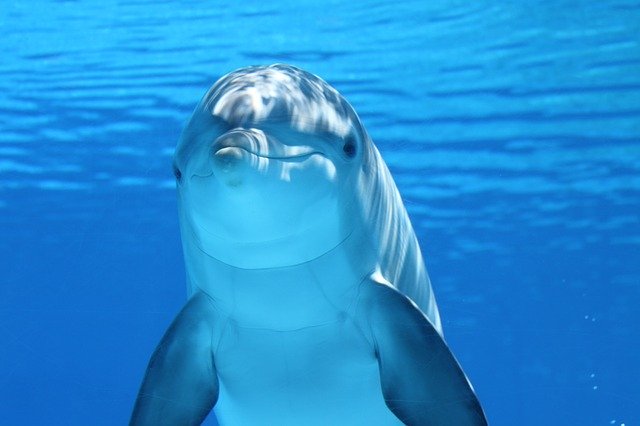 Every animal needs to sleep. For animals that live on land, sleep typically involves curling up in a safe space, closing their eyes, and becoming disengaged from the world.  But what about animals that live in the water, like whales and dolphins, that need to continuously swim and come to the surface to breathe?

To sleep without drowning, it turns out that marine mammals sleep with only half of their brain at a time1.  This arrangement allows one side of the brain to rest while the other can maintain swimming or breathing.  Sometimes this behavior can be seen by looking at the eyes: in some species, the eye controlled by the sleeping side of the brain is closed, while the eye controlled by the awake side remains open.  But it’s not always the same side of the brain that sleeps, they alternate.  Both sides need equal amounts of sleep; if one hemisphere is repeatedly interrupted, that side will need to sleep more to make up for the loss, while the opposite side will not.

Fur seals can display unihemispheric sleep too.  These animals spend some of their time on land, and some in the water.  When they’re on land, fur seals sleep with both halves of their brains at the same time, but when in the water, display unihemispheric sleep2.  Scientists have taken advantage of the fact that fur seals can sleep with just one or both sides of their brain to study how neurons control sleep and wakefulness3,4.  Researchers used electroencephalograms (EEG) to monitor the fur seals’ brains during four periods: when they were  awake and active, awake and quiet, sleeping with both hemispheres, or sleeping with one hemisphere.  While recording the EEG, they simultaneously measured the levels of chemicals released by neurons in various parts of the brain.

The scientists found that the neurochemicals acetylcholine, histamine, norepinephrine, and serotonin (which are all associated with wake-promoting neurons) were highest during active wake periods and decreased during bihemispheric sleep, with acetylcholine hardly present at all during this period.  These patterns match up with what’s seen in land animals. The surprise came when the scientists looked at the neurochemical levels during unihemispheric sleep. While the level of acetylcholine was tightly linked to which hemisphere was awake, interestingly, the levels of histamine, norepinephrine, and serotonin were no different in the awake hemisphere compared to the sleeping hemisphere.  While it would be useful to know the levels of sleep-promoting neurochemicals during unihemispheric sleep, these findings increase our knowledge of the neurochemical control of sleeping and waking. The many land animals that have been studied suggest that sleep and wake are controlled by the balance of these neurochemicals. However, these results suggest that, at least in fur seals sleeping with one half of their brain, sleep and wake depend on more than just these common signaling molecules.

Marine mammals aren’t the only animals that sleep with one side of their brain at a time.  Birds can display this behavior too. Instead of needing to breathe and swim though, it’s thought that birds typically use unihemispheric sleep to be more vigilant and avoid predators.  For instance, when ducks sleep in a group, the birds on the outer edge are more likely to keep their outward-facing eye open (and corresponding brain hemisphere awake) compared to birds in the center5.

Can the need for increased vigilance affect human sleep?  Although humans sleep with both hemispheres at once, some data suggests that humans display differences in sleep between the two sides of their brain when they feel threatened.  For instance, have you ever noticed that the first time you’re in a new place, it’s harder to fall and stay asleep, and you don’t sleep as deeply? This observation is called the “first night effect.”  When researchers perform sleep tests in a lab, they typically throw data from the first night away since it’s so different from sleep on the following nights.

Scientists from Brown University were interested in this effect however, and decided to keep EEG as well as  magnetoencephalography (MEG), a non-invasive imaging technique used to measure neuronal activity, data from the first night and compare it to the second night to see if there were any differences between the sides of the brain6.  They found that slow wave activity, which reflects the depth of sleep, was lower on the first night compared to the second night, and that on the first night, it was lower in the left hemisphere than the right.  Participants with a greater difference between their hemispheres took the longest to fall asleep, indicating greater anxiety and arousal and suggesting that the left hemisphere wasn’t sleeping as deeply as the right.

To test if the left hemisphere actually was more vigilant than the right during the first night in a new place, the researchers played a series of tones to the participants while they slept.  Occasionally they included a tone that didn’t match the others, called an “oddball.” When the tones were presented to the right ear (controlled by the left side of the brain), the brain response was three times greater than when the tones were played to the opposite side.  Participants were also more likely to briefly wake up, and recognize they heard a sound, after an oddball tone processed by the left hemisphere.  Together, these results suggest for the first time that while humans do sleep with both sides of their brain, they also display differences in the depth of sleep between the hemispheres.  So the next time you’re sleeping in a strange place, maybe you really can sleep with one eye open.

2 thoughts on “Sleeping with one eye open”